Our team, named The Cosmonauts (because we aim for the sky) returned to Lausanne today after a memorable weekend representing IMD at the annual RSM Private Equity competition in Amsterdam. The cherry on top … we won the competition.

RSM deserve a huge thank you for organising a fantastic event, with teams flying in from business schools across the world to both compete and to network! I was so impressed with our team. We laughed throughout the weekend and I’m convinced this positive spirit contributed to our success. Congratulations also to the tough competitors from IESE who were placed second and to IE who came third.

The competition began long before we arrived in Amsterdam. Weeks earlier we had received a case study about a bankrupt portfolio company of a private equity house. We would be representing a strategic PE investor and needed to decide if we would submit a bid for the company on their behalf, and if so, how we would structure our bid.

Friday afternoon began with a conference hosted at ABN AMRO, where guest speakers from PE, politics and finance discussed different aspects of PE deal making. We also used the opportunity to catch up with an IMD alumni who works at ABN AMRO, before the welcome drinks and dinner. We then spent until 3am perfecting our proposal ready, for the presentation on Saturday morning.

As we were presenting to the board of trustees in the bankruptcy process, we strategised over how they might judge the competition. Our bid quantum was quite modest. The previous PE house had stripped out many of the assets and structured a lease back plan. We therefore felt our [modest] proposal was both justified and realistic given our assumed debt capacity. The company comprised of three business units. For the first business, we valued it at a discount to the remaining assets and an additional sum for the brand. For the second business unit, we applied comparable trading and precedent M&A transaction multiples. We proposed not to bid for the third business unit as it was not strategic to our existing portfolio. Our total valuation range was below the existing debt on the balance sheet. We therefore proposed to acquire the company for €1, but also rolled over the debt and assumed all the liabilities. Thereby we felt our offer was fair for the debt holders, providing them with a positive LTV, as well as providing us with the potential for significant upside on implementation of our operational turnaround strategy.

The 15 business schools presented their proposal to a panel and three teams were chosen to go through to the final in the afternoon. Once it was announced we made it successfully through to the second round, we sought feedback from the judges of our first panel. They noted that our strategy was “bullsy” and provided us with some pointers. The final three contenders were given some further information and an hour to adapt proposals and financial models accordingly. We had quantified every part of our turnaround strategy, including the capex required and the potential upside. We tested the sensitivity of the variables so that we were able to present the numbers with confidence.

In our original proposal we had identified a list of partners who were looking to expand into this market and who would acquire the third, non-core business unit. In the second round, we were still confident of the approach, but to provide the trustees greater assurance, we noted that we if this didn’t go through, we would take a bridge-loan and spin off the business across a two year time horizon.

After an eventful weekend in Amsterdam, we returned to Lausanne on Sunday evening at midnight. This did not deter us from returning to class on Monday at 8am as it was our very last finance class of the year with Professor Nuno Fernandes. We had a special bottle of Dutch liquor for him, to thank him for his input in the run up to the competition. He also had a surprise for us, and had arranged for Pedro Wongtschowski, pervious CEO and current president of Ultrapar to come to class as a guest speaker. Nuno has had a knack for bringing cases to life and inviting some of the highest profile speakers to class. Hence, he is an honorary cosmonaught! 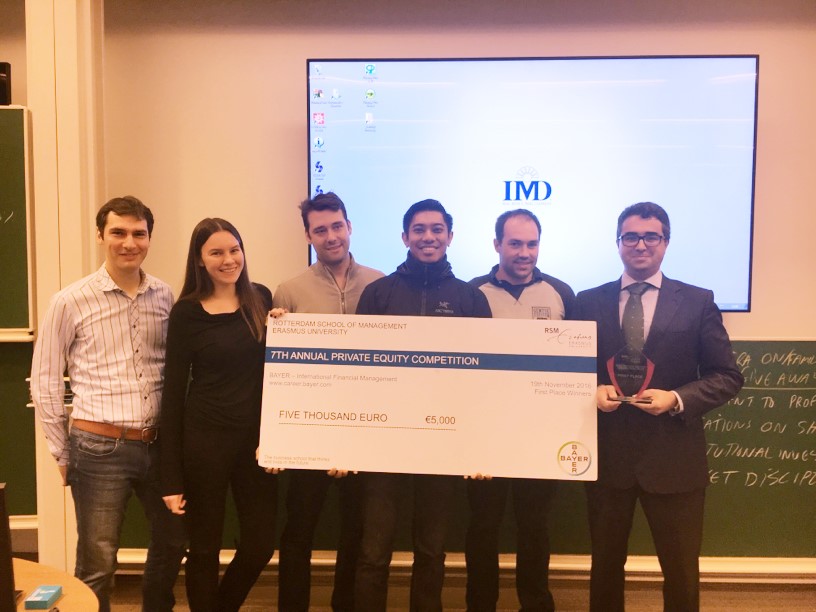 Sophie , Joseph , Igor , Roraj & Ulrich, congratulations for this wonderful achievement.
Thanks for the detailed blog as well Sophie, gives aptly the glimpse of the whole competition.