Martin Schmidt, German, is the author of today’s diary entry. He shares with us his experience and pleasure of having become a father whilst completing his MBA at IMD.

“What were you guys doing last January?“ This was the question that Benoit Leleux, our Program Director, asked after congratulating me on the birth of my son Leonard. With three “MBA babies” born in October, this was indeed a fair question to ask. So if next year’s MBA program gets even more demanding and stressful during its first month, I fear I might be partly to blame.

That said, the support we had from the IMD community was fantastic. Mareike, my partner, moved to Lausanne when she was already six months pregnant, and without the help of IMD staff, other participants and partners, things would have been a lot more difficult.

I know that some Diary readers are prospective MBAs who may be considering starting a family during their time at IMD. Having gone through the experience myself, I can wholeheartedly recommend it, so let me try to resolve some of your doubts*: 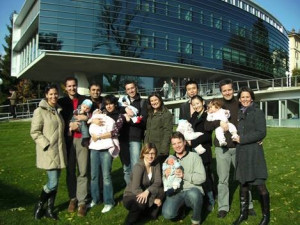 Looking at this picture now, I can’t believe how much Leonard [the one in the front, dressed in light blue] has grown already! But before I start boring my audience with stories about all the little miracles Leonard performs already [he just started smiling], I will stop writing and spend some more time with our son…

Good night to you all,

*I don’t want to be sexist, but I’m afraid my advice applies only to male participants – for obvious reasons, things would be a little different for female participants.