A Tribute to Mount Kilimanjaro

Today’s guest entry is by Linda Chang, who is sharing her experience on climbing Mount Kilimanjaro.
“Kilimanjaro is a snow-covered mountain 19,710 feet high, and is said to be the highest mountain in Africa. Close to the western summit there is the dried and frozen carcass of a leopard. No one has explained what the leopard was seeking at that altitude.”

Ernest Hemingway, The Snows of Kilimanjaro

At the Uhuru peak, I paused, breathed in deeply and looked around. The Southern Ice Field loomed in the distance, extending far into the firmament. Still, in the dark sky spreading wide and high, the waning moon pinned halfway and the stars shined in full glimmer.

“You moved too fast Linda; sunrise in another hour or so”, said my guide Freddie with a grin.

The journey had been long and tiring, but well-worthy. In the end, I didn’t manage to decipher the mystery of Hemingway’s frozen leopard, but I saw things far more beautiful. Surrendering myself to the sublime beauty of nature, I also heard the inner voice from my heart becoming more audible. My tears welled up while sighting the skyline tinged by the first shaft of rosy sunshine. 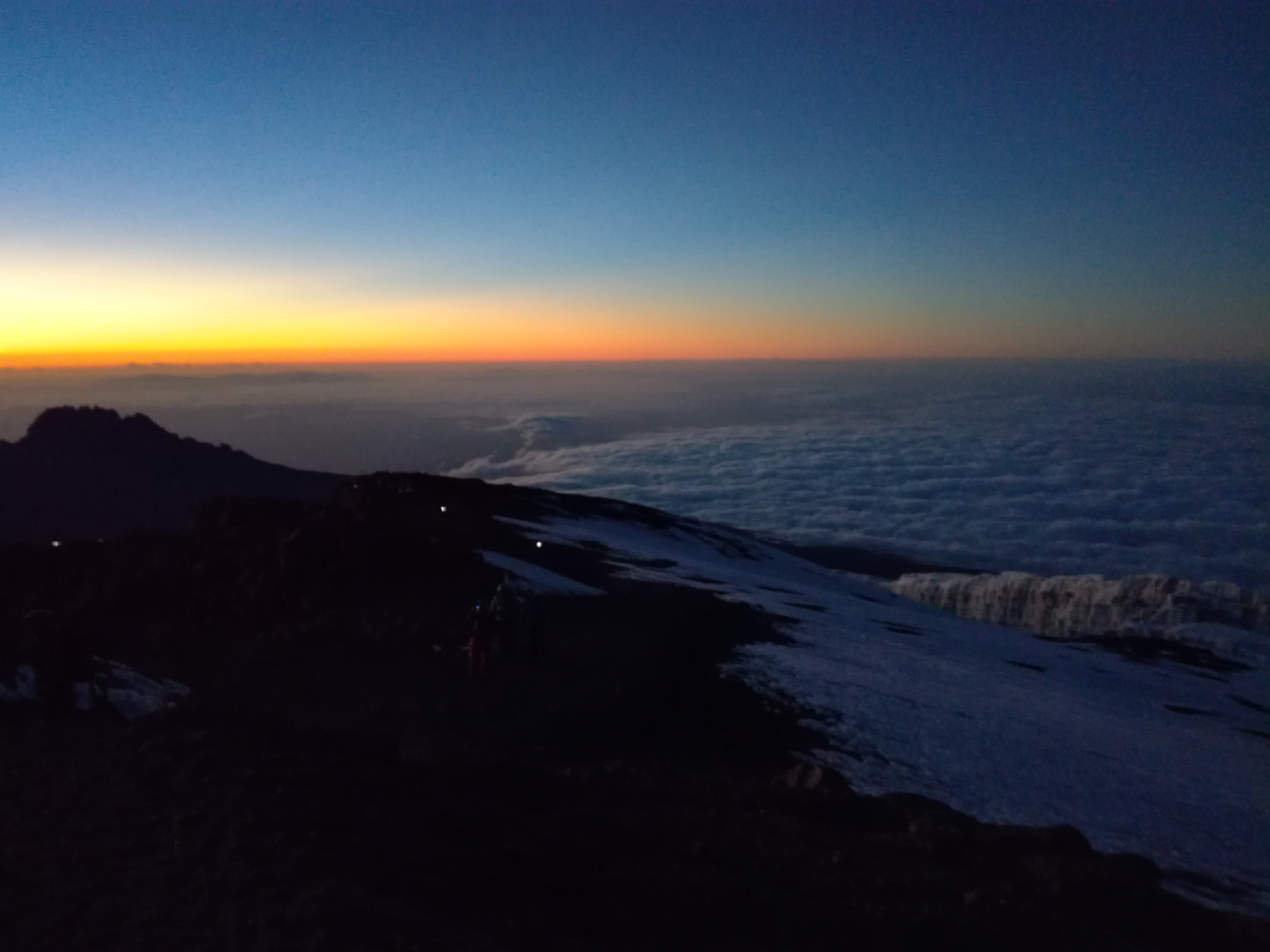 The last day of Kilimanjaro trekking started at midnight, from Barafu camp at 4700m altitude. Barafu is named after the Swahili word “ice”. It is barren and bleak, with the ever-present gales blustering around the tent. Freddie helped me with a final check of the equipment and passed me his warm gloves, as I kept rubbing my hands for warmth. Undeterred by the altitude sickness, I packed light and departed gleefully. It was not long before my optimism began to fade away. Every breath turned shorter, and every climb became more like a toil. I had been losing appetite for almost two days and only munched chocolate bars for replenishment. Neither could I rehydrate above 5000m, as water had become solid ice. Long rests along the way were impossible, since no one could endure the gusty and frigid cold in stillness. When nausea and dizziness blurred my vision, self-doubt reigned.

Why am I here?

Is this what I always wanted?

I had traveled far to get here and just spent four days walking up to this altitude.

Should I give up now?

What am I trying to achieve at the end of the day?

Am I still far away from my final destination?

Bombarded with a myriad of questions, I almost faltered at the narrow and rocky ridge.

After a big sigh, I turned to Freddie and asked:

“Where is the summit, Fred? Could you please point it out to me?”

He walked over in silence, tidied up my hair over the forehead and rubbed my hands warm. I was confused. With a deep fatigue setting in, I could not bear the painful ambiguity further.

“Fred, tell me, I need to know where I am heading so that I can allocate the remaining energy…I don’t have much left”, I panted out.

Freddie gave me a lift onto the stable ground and gestured me towards the trail, just like what he did near the Shira camp three days ago. 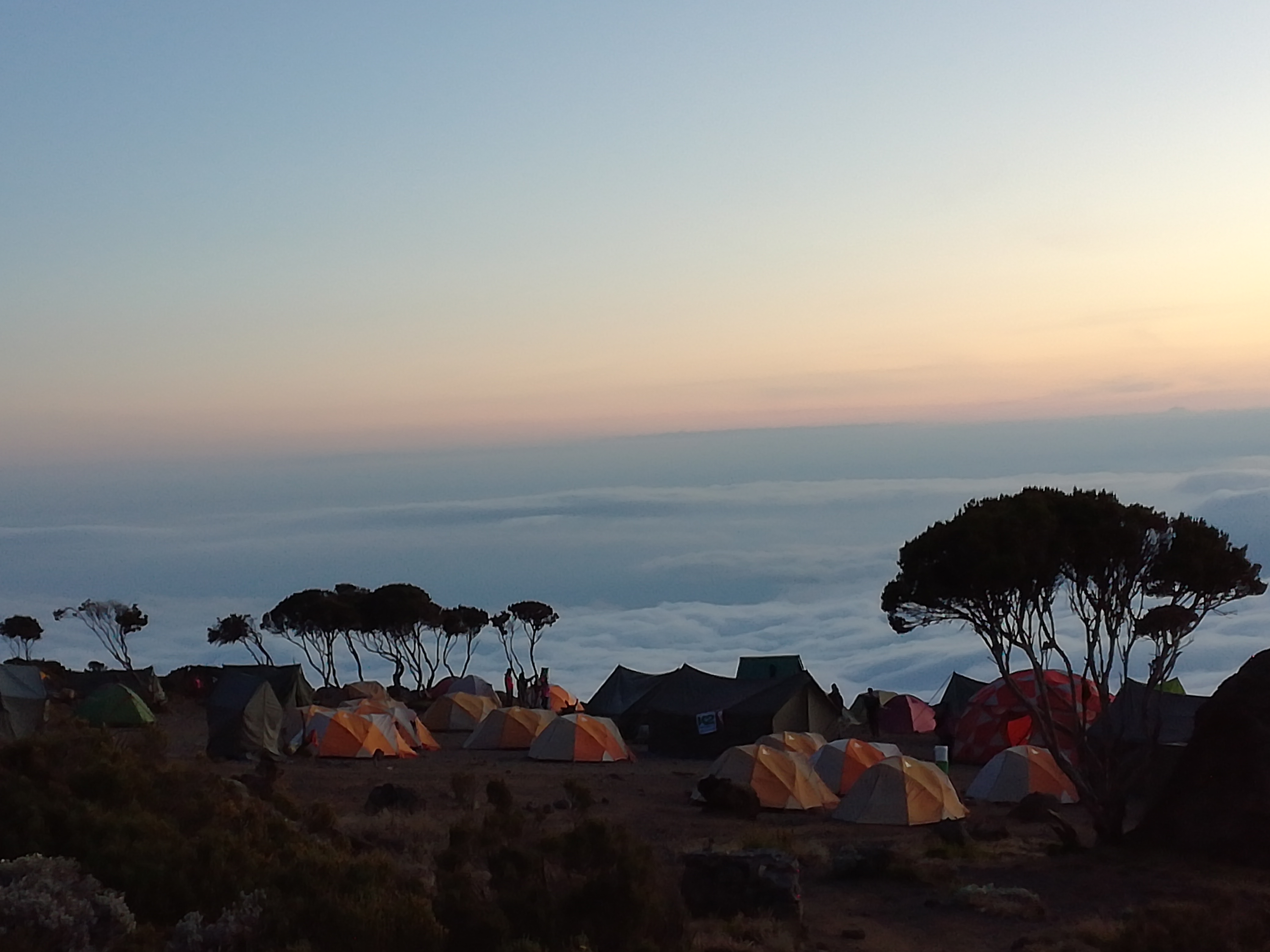 Yes, three days ago, I proposed a secret race against other trekkers and we had a landslide victory, leading other groups by 3 hours and arriving at Shira around noon. As a winning prize, Freddie took me to the nearby hillcrest for a small hike. The moorland laid below us, speckled by the traveler tents and trimmed by marshmallow-like clouds.

“You see the big mountain at the back? We go to the Uhuru peak from there.”

I looked afar at the snow-covered top and mused.

“I know, there is not much snow now, global warming… it was very different twenty years ago”, he murmured to himself.

Suddenly, the wind swept over the plain, and the mountain vanished in the shrouding fog. Close-by, my search for butterflies and pigeons, those brave lives at 4000m above sea level, also ended in vain. The rapid changes in weather caught me off-guard, resembling the vicissitude in life. At times, we steel ourselves so as to stand firm amid turbulence and tribulation. 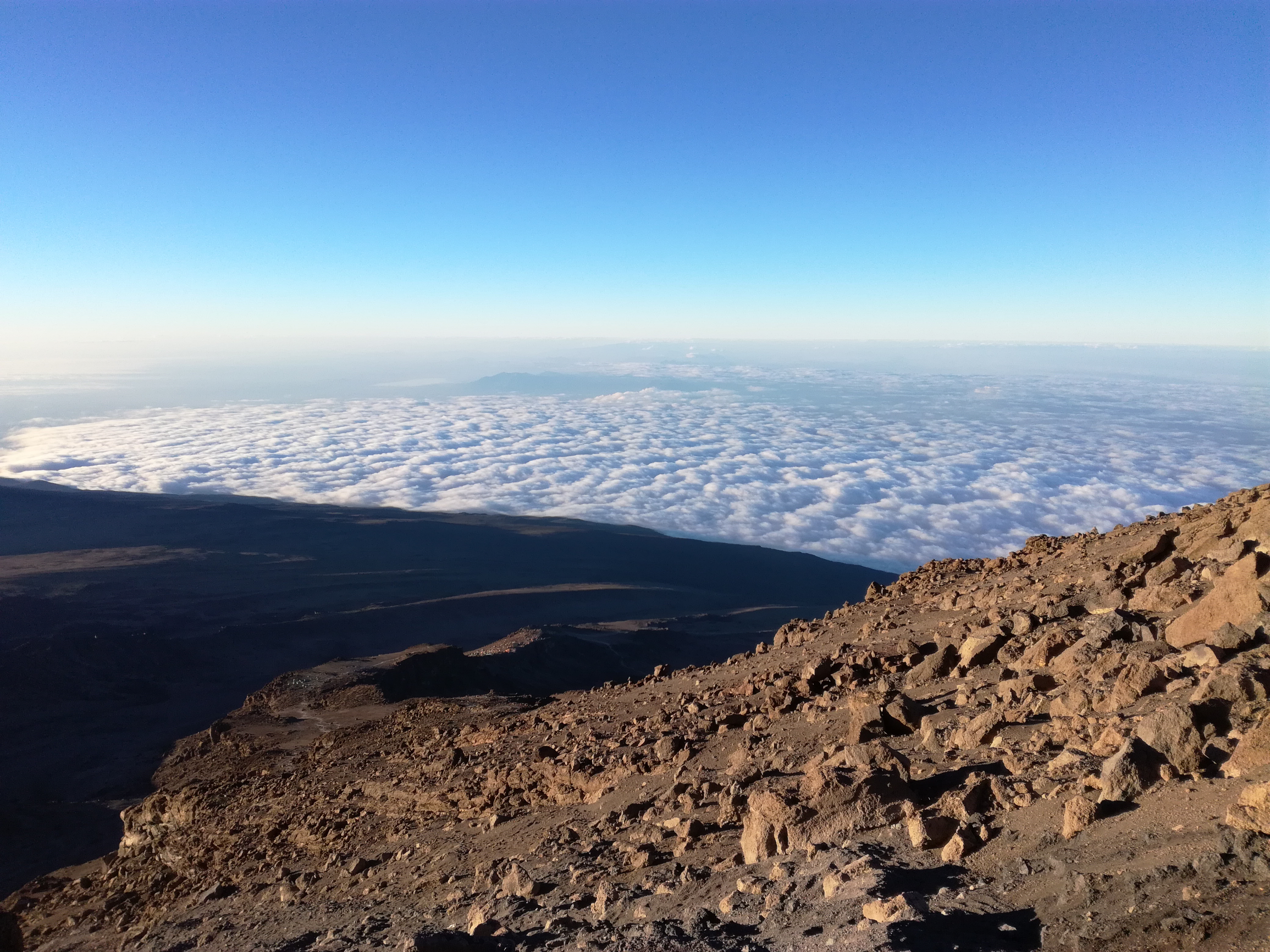 My restless mind finally came back.

I decided to give one last try.

My voice was low, but my determination was intact.

“Linda, don’t ask again, you won’t know where the summit is until you get there.”

Freddie set off again but his words resonated in the air. I was about to respond, but no better language could be found to express myself. With a final gaze at the horizon, I was back on the trail as well.

P.S. Officially speaking, this is a CEP month, so I feel obliged to add some of my “real life, real learning” experience. I recharged well and returned to Nairobi, Kenya for my project. Working with the GM, I have exposure to all the business units in a local credit referencing bureau (CRB). I picked up R programming and Python on the side and got involved in account management, business process improvement and IT infrastructure development. Africa is an exciting place, and I have had interesting encounters here. Also, Jack Ma was in town yesterday and gave a speech at the University of Nairobi. I may save this story for a more serious post in weeks to come.